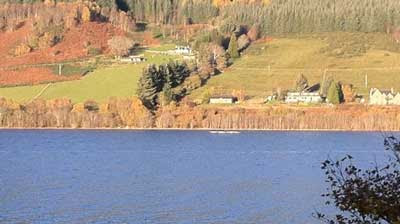 While working on Aldourie Castle gardens on the banks of the Loch Ness, 27-year-old Mr Preston spotted a shape on the loch's surface out of the corner of his eye. He said: “I was just walking through the castle gardens and I spotted something in the distance. When I looked closer I could clearly see the four hump-like features. I thought I’d take a picture of it, to see if there was anything in it, to see what others thought.

“I was surprised that it stayed there as long as it did. I took various shots of it before it suddenly disappeared. I literally just turned my back and it was gone.” He showed one of his friends who was also convinced there was certainly some mystery in the pictures. 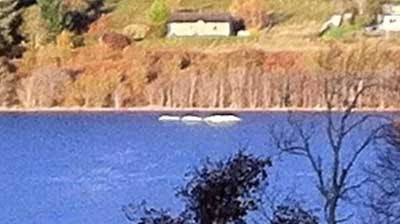 When asked whether or not he believed in the monster, Mr Preston said: “Well there’s definitely something in the myth.There were no ripples in the water, no boats, nothing around. I have no idea what it was, but it undoubtedly looks like Nessie.” The latest sighting has brought hope to monster enthusiasts, as it had been a relatively quiet spell for spotting any activity in the Loch. Fears had been mounting that Nessie might be dead since reports of any sightings had been diminishing.
Posted by arbroath at 8:02 am
Email ThisBlogThis!Share to TwitterShare to Facebook