A Right-wing political party in Switzerland has produced a provocative anti-immigration campaign in which a photograph of naked young models wading into Lake Zurich is contrasted with an image of headscarf-wearing Muslim women bathing in filthy water. The campaign is meant to warn the Swiss of what could happen to the country if it allows greater immigration. It comes as the Alpine nation prepares to vote on whether immigrants who commit serious crimes should be automatically expelled. 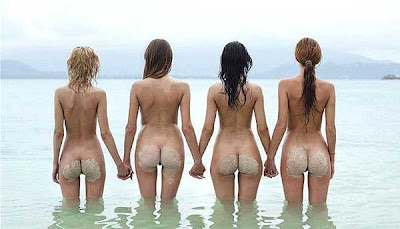 The online campaign was produced by a regional branch of the Swiss People's Party (SVP), the largest in parliament and the country's biggest political force. The first image shows a rear view of four young women holding hands and standing in the shallows of Lake Zurich. The second shows a group of elderly women, possibly Albanians or Bosnians, wearing headscarves and smoking as they immerse themselves in muddy water. It is supposed to represent a vision of Switzerland 20 years from now.

A spokeswoman for the SVP said that the controversial images had been created by party activists in Wohlen, west of Zurich, and would not be adopted nationally. Switzerland will hold a referendum next week in which voters can decide whether foreigners who have been found guilty of murder, rape, drugs trafficking and other serious offences should be deported. The expulsion initiative was put forward by the SVP, which has won support by capitalising on fears about foreigners, who currently make up more than a fifth of Switzerland's population of 7.7 million. Recent polls show that 54 per cent of Swiss voters would vote in favour of the measure while 43 per cent are against it. The federal Justice Ministry has warned that a "yes" vote on Nov 28 could bring Switzerland into conflict with international obligations such as the European Convention on Human Rights, which prohibits discrimination on the basis of race, colour, religion or nationality.
Posted by arbroath at 8:07 am
Email ThisBlogThis!Share to TwitterShare to Facebook