A cobbler who won't buy heaters for his freezing staff has had them hypnotised into thinking they're warm. Martin Connellan bought coats for the lads in his cobblers workshop where temperatures have plunged to -13°C. But with doors left constantly open to clear solvent fumes, the workers were still left shivering in the snow.

However, just a five-minute session with hypnotist James Kerwin saw them stripping down to shorts and T-shirts, and saying they were too hot. Worker Adam Hood, 27, said: "I definitely feel much hotter than I was. All my life I've had cold hands and that's even gone now. It's crazy how you can go from one extreme to the other like that." 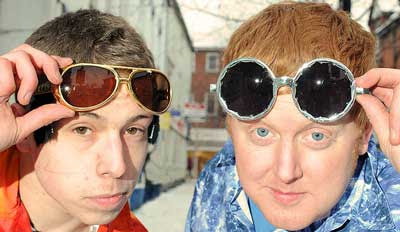 Self-confessed Scrooge Martin, who runs the workshop in Bromsgrove, Worcs, said: "The lads were all complaining because I like to keep the doors open. I bought them all jackets but they were still moaning so this was the last resort. I am a very sceptical person so I didn't think it would work - but soon they were complaining about how hot they were."

Hypnotist James of Studley, Warwicks, said: "It's all about mind over matter. It's a case of reprogramming people like you would a computer. You can retrain people into thinking differently about how they feel. It seems to have done the trick."
Posted by arbroath at 8:00 am
Email ThisBlogThis!Share to TwitterShare to Facebook

They may feel warm... but couldn't they still get hypothermia and not know it?

I wondered the same.

Yeah, it's still a dangerous working environment if it's -13 -- and all the more so, if they've been hypnotized into removing their coats.