A farmer unwittingly shot two suspected burglars who were allegedly targeting a cannabis factory, which he didn't know existed, on his property. Edward Tibbs, 62, had been aiming at a fox which he had pursued outside on his mobility scooter. However, he found himself arrested on suspicion of attempted murder after two men who had ventured on to his land turned up in hospital with gunshot wounds.

The farmer says he had no idea he had injured the men until 16 armed police stormed his home in Crays Hill, Essex, later that day. Mr Tibbs, who suffers from multiple sclerosis and neuralgia, told detectives he had been awoken by the sound of geese and, after going outside on his mobility scooter, had shot three times into the dark, believing he was firing at a fox. “It was an accident as far as I am concerned. I was out shooting that night on my land and apparently two people got shot there,” he said. 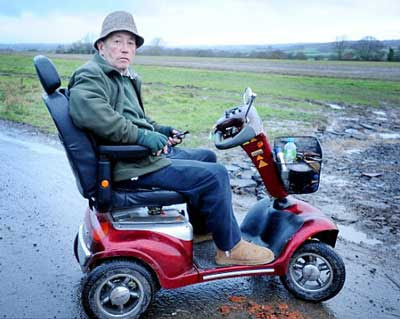 “I didn’t know anyone had been hit. If I did, I would have called the police. Apparently they went to hospital and police were called and they said where it happened. It happened at 4am, but the first I knew about it was when the police came.” The two men, aged 27 and 30, arrived at accident and emergency with gunshot wounds to their legs and backs. Police later discovered that a cannabis factory had been set up in a rented outbuilding on Mr Tibbs’s farm and it was thought that the two men were attempting to burgle it when they were shot.

Mr Tibbs, who said he had no knowledge of the cannabis plants, was later released without charge. The injured men, from Basildon, were arrested on suspicion of possessing a firearm but were also released without charge. Two women who were arrested in connection with the discovery of 50 cannabis plants were also freed after questioning. Mr Tibbs complained that police had revoked his two shotgun licences following the incident. But an Essex Police spokesman said Mr Tibbs was “unfit to be entrusted with a firearm and may present a danger to public safety and peace”.
Posted by arbroath at 8:00 am
Email ThisBlogThis!Share to TwitterShare to Facebook

good luck with this new template

I'm not sure if I like it or not right now. But then I'm not a great fan of change.