Chinese schoolchildren are to sit mandatory manners classes in an attempt to smooth some of the rougher edges off modern Chinese society, the country's ministry of education has announced. From primary school onwards, Chinese children will now receive lessons in the art of queuing, good table manners, how to respect their elders and betters and the correct way to write letters, emails and even send SMS messages.

Older children will be tutored in the arts of introducing oneself to strangers, dealing politely with members of the opposite sex, making public speeches and the rudiments of dealing with foreigners and (to Chinese eyes, at least) their strange ways. "The goal is to let students know that China is a country with a long history of civilisation, rituals and cultures," said the guidelines which were published on the ministry's website. 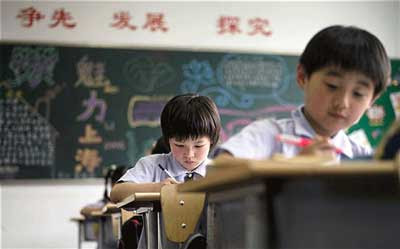 Behind the lessons lie Chinese government fears that modern China, having outgrown the guiding ideologies of both Confucianism and Communism, has become an increasingly materialistic and empty society. China's government frequently tries to improve the situation by launching patriotic campaigns against China's earthier habits, such as spitting, smoking in public lavatories, littering and queue-jumping, but they are mostly ignored.

"The campaign is very necessary for our society now," said Xin Tao, vice director of China's the National Assessment of Education Quality and a professor of Beijing Normal University said. "It's true that many Chinese people aren't well-mannered." However poor manners might be a relative thing. "Without doubt, Chinese children are, by some distance, better mannered and more attentive than their English counterparts," said an English teacher who has taught in both Chinese and English schools, "the problem comes when they leave and enter wider society. They have to fight to get on."
Posted by arbroath at 8:02 am
Email ThisBlogThis!Share to TwitterShare to Facebook

For the love of god, teach them not to fart in public! Judging by what I smell around here from the immigrant population, China must stink like a cesspool.