A company in the UK has been criticised for making Royal Wedding condoms featuring images of Prince William and Kate Middleton. Crown Jewels Condoms of Distinction are being sold in royal purple packs with the slogan: “Lie back and think of England".

The condoms promise "a better class of lovemaking" and features a saucy guide to using the "Heritage Edition" condoms inside. The leaflet claims: "England boasts some of the finest lovemaking in the world, with a tradition going back generations." 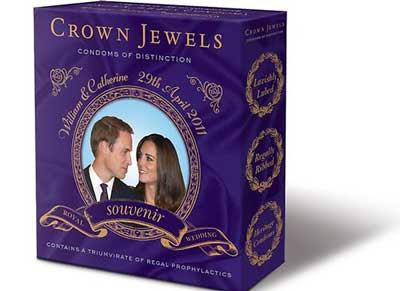 Company spokesman Hugh Pomfret insisted they were the perfect souvenir for the April 29 wedding. "We set our craftsmen to create these heirloom quality love sheaths. In years to come they'll be a memento of a magical day," Mr Pomfret said.

Majesty magazine editor Ingrid Seward said the condoms are "completely tasteless and really rather hurtful. Prince William has a great sense of humour but this is a step too far. This is a cheap swipe to make money," she said.
Posted by arbroath at 8:00 am
Email ThisBlogThis!Share to TwitterShare to Facebook

I just ordered a box yesterday! Not for myself of course, it's to be a birthday present for a nephew

Heh heh, I hope he has fun with them!

Judging by all the stories about Britons who have kids when they're teenagers, I think they need all the condoms they can get!