A hair transplant patient was stunned when he shaved his head and discovered the word ‘wanker’ – etched into his scalp. Darren Hope, 40, walked around with the swear word on his head for a staggering 19 years before a friend spotted it during a cricket match. Darren had the implants done when he was 21 after his hair started falling out. He spent £7,000 on the treatment at a top London clinic where follicles were removed to cover a bald spot on the crown of his head. But the cheeky surgeon removed the follicles to spell out of the word ‘wanker’ in 2ins capital letters across the back of his head. 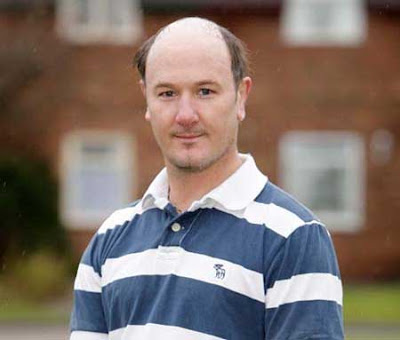 Although the operation gave him a full head of locks, Darren had no idea that his hair contained a swear word. The ripped out hairs never grew back and unbeknown to Darren he was left with the swear word branded into his head. Single Darren, from Nuneaton, Warks., blasted the surgeon who performed the procedure. He said: ”Ever since I got the implants I grew my hair long but last summer I decided to get it all shaved. ”I was playing cricket and took my baseball cap off when one of my mates started laughing when I turned round.

”I spun round and he said to me ‘you do realise you’ve got wanker written on your head’. I thought he was joking but when I went to look in a mirror I could clearly see the word wanker written backwards in the reflection staring back at me. It’s a good five inches long and very visible. I don’t think anything can be done about it, so I’ll have to keep my hair long from now. It’s like someone’s gone around with a small razor and cut it in. I can’t believe I’ve been walking around with the word wanker on the back of my head for nearly 20 years and not even known it.” 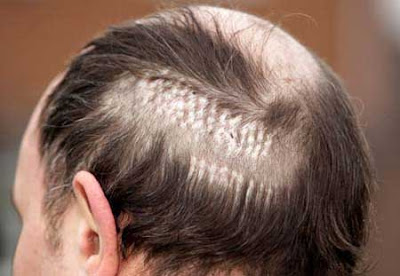 Former electrician Darren, who reckons he’s spent around £60,000 over the last 19 years on hair operations, is mystified about why the word was left in his scalp. The area where the hairs were taken from never grows back so Darren will have the swear word scored into his scalp for life. He is now seeking compensation from the surgeon who performed the first operation. He said: ”I think he should be held accountable. I’ll never be able to have short hair again now and knowing it’s there is horrible. I feel like he committed criminal damage on me and has made me a laughing stock.”
Posted by arbroath at 8:01 am
Email ThisBlogThis!Share to TwitterShare to Facebook

I've been staring at that photo for 5 minutes, and I don't see any letters, just lines going up and down. It looks like the area just below that's not shaved has the same pattern.

To be honest, if you didn't tell me that there was a word there, I'd never have guessed. Though if there really is, I have to agree with the surgeon for dealing with such a vain tit, though not necessarily his method of expressing it.

It's not vain to want hair. Especially when you're only 21.

But I don't see the word, either. It could just as easily be Jesus.