A new addition to the Leipzig Zoo has yet to be seen by the public, but that hasn't stopped her from becoming a star. Heidi, a young cross-eyed opossum, is shaping up to be the most popular furry critter in Germany since Knut the celebrity polar bear. She won't be visible to the public until July, but a cross-eyed opossum has turned into Germany's new media darling. Two-and-a-half-year-old Heidi has even inspired a YouTube hit, her own high-end stuffed animal, and has more than 57,000 friends on Facebook, and counting. 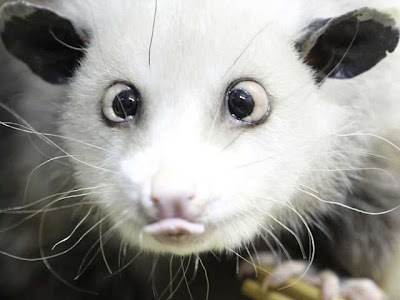 "It really is surprising how famous and loved she is - I guess it has to do with being cross-eyed," said Dr. Helmut Schache, of the toy manufacturer Kösen, whose hand-made stuffed Heidis will be available for order in two weeks. The Heidi rage started in mid-December, when journalists went to the zoo in the eastern city of Leipzig to photograph animals that will be housed in the zoo's upcoming "Gondwanaland," a tropical center based on the regions of the ancient continent. Once those photos became public, they turned the nocturnal marsupial into an overnight sensation. Leipzig Zoo officials, who say that the enthusiam was "surprising and unplanned," have had to put up a new page on their website answering questions about Heidi in an effort to ward off the unexpected media barrage.

Stefan Langner, a composer and musician in a wedding and party band called "90 Degrees," was immediately inspired. "We saw Heidi on TV, and we were so charmed, that we had to write a song about it," Langner said. Langner collaborated with fellow band member Gitta Lüdicke in writing the song, which he says was completed in two days. Meanwhile, Schache and his family-owned stuffed-animal business have developed a prototype of a Heidi stuffed animal, which will be "handmade in Germany - finest quality." The opossums will come in two different sizes, including a 50-centimetre life-size toy that will sell for €85 ($110), with some of the profits going to the zoo for Heidi's benefit, Schache said.

Hiding behind all of the hoopla is the young opossum, of the Virginia variety, who will live out-of-sight at the zoo until her new house is officially unveiled July 1. It is a long way from home. According to the zoo, Heidi and her sister, Naira, originally came from the US state of North Carolina, where they were turned over as foundlings to a facility for wild animals. The sisters then made their way to the zoo in Odense, Denmark, before ending up in Leipzig. The reason for Heidi's crossed eyes is unclear, but zoo officials speculate that it might be because of fat deposits behind her eyes, caused by a bad diet early in life. The eyes might look off, but they cause the animal no pain, and don't affect her ability to get around, according to the zoo. She is, aside from her looks, a normal opossum.
Posted by arbroath at 8:09 am
Email ThisBlogThis!Share to TwitterShare to Facebook