A robotic elephant that can hug using its trunk and has hundreds of potential facial expressions is offering hope to autistic children. Scientists at Vrije University in Brussels have developed the robot, which is now being trialled with children from Romanian orphanages which they believe could be a major breakthrough for children suffering from autism. 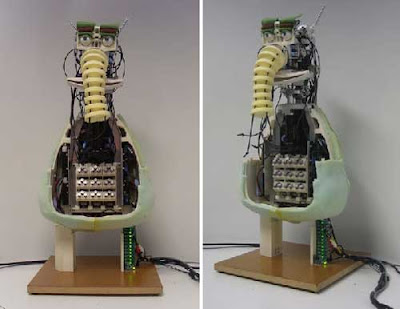 Autism is a neural disorder characterized by impaired social interaction and communication, and by restricted and repetitive behaviour that first appear when a child is three years old. Probo the robot can gives hugs and express feelings that psychologists and scientists alike hope will help autistic children to identify feelings and emotions and help them interact with the people around them.

The robot which is currently on an exchange program at the psychology department at the Babes-Bolyai University in Cluj, Romania, has reportedly achieved some remarkable results in its interaction with autistic children. 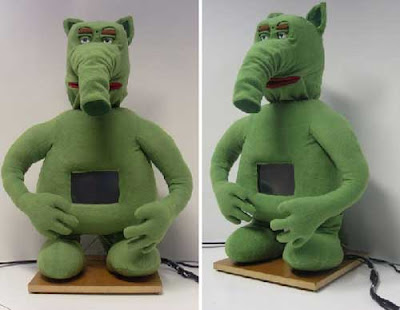 They said Probo uses human-like social cues and communication abilities to teach the children. The robot has a fully actuated head, with 20 degrees of freedom, capable of showing facial expressions.
Posted by arbroath at 8:03 am
Email ThisBlogThis!Share to TwitterShare to Facebook

That thing's disturbing! Is that what elephants look like when engineers drop acid? Though I have to admin I did like its expression of disgust when the child squeezed its proboscis.

Or you could just interact with a child 1-on-1.

Is that what a Teletubby looks like after you've taken some LSD?

Just a heads up; autism is diagnosed at a much earlier age. Infants who avoid eye contact and respond badly to physical contact are usually autistic.And that pseudo elephant is freaky!