Beer to be classified as alcohol for first time in Russia

Beer is to be legally classified as an alcoholic drink in Russia for the first time as the Kremlin forges ahead with the toughest anti-alcohol campaign since the fall of the Soviet Union. The beverage is technically classified as a foodstuff for now, an anomaly that has allowed producers to avoid a sweeping new crackdown on alcohol advertising and night-time sales.

But a new Kremlin-backed bill that passed its first reading in the lower house of the Russian parliament on Tuesday will abolish beer's special status, dragging Russian alcohol regulation into the 21st century. "Normalising the beer production market and classifying it as alcohol is totally the right thing to do and will boost the health of our population," Yevgeny Bryun, the ministry of health's chief specialist on alcohol and drug abuse, said. 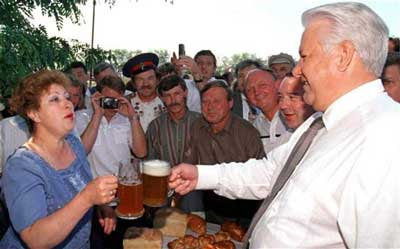 "We have been talking about and have wanted such a measure for ages. I take my hat off to the parliament." The new law would restrict beer sales at night, ban its sale in or close to many public places such as schools, and limit cans and bottles to a maximum size of 0.33 litres. Although vodka, the national tipple, remains extremely popular, Russia's beer consumption has more than tripled in the past 15 years, boosted by low prices, ready availability and lax regulation.

Industry sources say Russia is now the third or the fourth biggest beer market in the world by net consumption after China and the United States. But with a historic penchant for strong spirits such as vodka, many ordinary Russians regard beer as a soft drink. It is not uncommon to see men swigging a can of beer on their way to work or teenagers downing a swift lunchtime beer or two in the park.
Posted by arbroath at 5:06 am
Email ThisBlogThis!Share to TwitterShare to Facebook

It is a good news that Beer is to be legally classified as an alcoholic drink in Russia. I like beer so much than other drink. It is a delicious drink.

Excellent! Now they can double their efforts on reclassifying vodka from water to an alcoholic drink.