Competitors have been baring nearly all in the snow in Germany for the naked sledging world championships. Dozens of topless sledgers took part in the event in Braunlage, in front of a record crowd of more than 17,000 spectators. 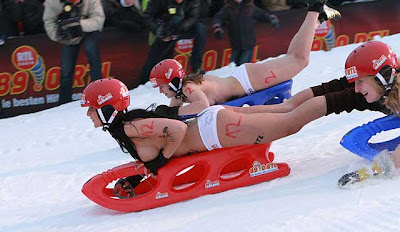 With only crash helmets to protect their heads and briefs to protect their modesty, teams of male and female sledgers fought it out in the team event, won this year by three workers from a local hotel. "It's a very closely fought contest which is good for us because we're all very keen on studying the photo finishes," said one judge.

Naked racers sledged down a 90 metre long iced snowy piste battling it out for the prize of £1,000 as well as the title of Naked Sledging World Champion. Race organiser Tobias Wannemaker said: "This year attracted more people than ever. The naked sledgers definitely got things hotting up, even in such cold conditions. 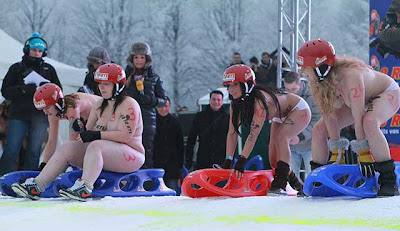 "Over 400 people applied for a place in the third annual race but we could only select 26. We had people of all ages, shapes and sizes. It made for an interesting selection. Next year we hope we can select more people," he said.

There's a NSFWish video here.
Posted by arbroath at 5:08 am
Email ThisBlogThis!Share to TwitterShare to Facebook

I don't care about the helmets... They are there for a good reason. But if they are wearing underwear then they ain't naked...

This is just topless sledging!