The plastic found in a single turtle's stomach

This collection of hundreds of coloured, jagged shards could be a work of abstract art. But the objects in the photograph to the right are the contents of the stomach of a sea turtle that lost its battle with plastic pollution.

Environmentalists examined the stomach of the juvenile turtle found off the coast of Argentina. The bellyful of debris that they found is symptomatic of the increasing threat to the sea turtles from a human addiction to plastic. 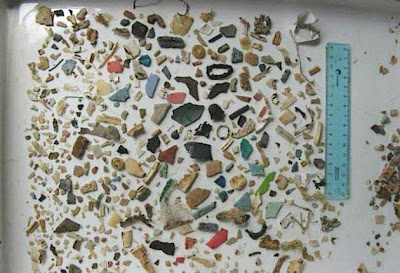 Sea turtles often mistake plastic items for jellyfish or other food. Ingesting non-biodegradable ocean pollution can cause a digestive blockage and internal lacerations. The result can be debilitation, followed by death.

Humans currently produce 260 million tons of plastic a year. When those products are pulled into the sea's currents, the plastics do not biodegrade but are broken into smaller pieces which are consumed by marine life at the bottom of the food chain. An examination of gastrointestinal obstruction in a green turtle found off Florida discovered that, over the course of a month, the animal's faeces had contained 74 foreign objects, including "four types of latex balloons, different types of hard plastic, a piece of carpet-like material and two 2-4mm tar balls."
Posted by arbroath at 5:12 am
Email ThisBlogThis!Share to TwitterShare to Facebook

and then we wonder how it comes we have too many jelly fishes reaching our coasts
in nature they get eaten by tuna & sea turtles, but killing those this way doesn't help the situation...

"Every piece of plastic ever made still exists"

"Every piece of plastic ever made still exists" ABSOLUTE RUBBISH, STUFF and NONSENSE; uninformed, anti-scientific RUBBISH!

"Every piece of plastic ever made still exists."

Except the pieces that have been burned or otherwise degraded, of course.