Bungling police have wrongly raided innocent man Matt Jillard's home more than 40 times in the past 18 months. Riot vans and patrol cars have repeatedly raced to Mr Jillard’s home because of a mix-up over his address.

Officers even tried to kick down his door at 3am on Christmas Day – then called again just 14 hours later. The 38-year-old said: ‘I could see the funny side at first but 18 months on, I’m getting really annoyed.’ 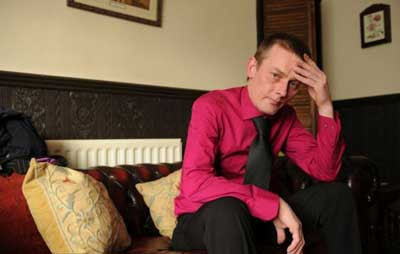 Mr Jillard was told his address in Repton Road, Birmingham, had been confused with nearby Repton Grove. But the raids have continued. Mr Jillard, a handyman, said: ‘I’ve been told three times that they have put a marker against my address – but nothing has changed.

'You wouldn’t think it was that hard to distinguish between a road and a grove.’ West Midlands Police said ‘a number of measures’ had now been put in place to stop the problem.
Posted by arbroath at 5:04 am
Email ThisBlogThis!Share to TwitterShare to Facebook

What the heck is going on at the house in Repton Grove?

Nobody knows. The police keep trying to go and check it out, but they can't seem to find the place.