A blind girl who is fluent in four languages has become the youngest interpreter to work at the European Parliament – at the age of ten. Alexia Sloane lost her sight when she was two following a brain tumour. But she has excelled at languages and is already fluent in English, French, Spanish and Mandarin – and is learning German. Now she has experienced her dream job of working as an interpreter after East of England MEP Robert Sturdy invited her to the parliament building in Brussels. 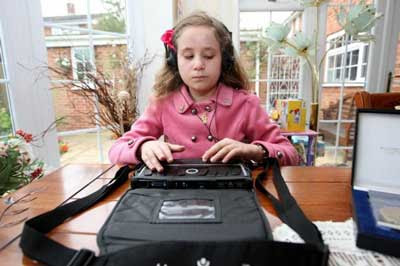 ‘She was given a dispensation to get into the building, where there is usually a minimum age requirement of 14, and sat in a booth listening and interpreting,’ said her mother, Isabelle. ‘The other interpreters were amazed at how well she did as the debate was quite complicated and many of the words were rather technical.’ Alexia has been tri-lingual since birth as her mother, a teacher, is half French and half Spanish, while her father, Richard, is English.

She started talking and communicating in all three languages before she lost her sight but adapted quickly to her blindness. By the age of four, she was reading and writing in Braille. When she was six, Alexia added Mandarin to her portfolio. She will soon be sitting a GCSE in the language having achieved an A* in French and Spanish last year. She is now learning German at school in Cambridge.

Alexia talking about her love of books earlier this year.

Alexia has wanted to be an interpreter since she was six and chose to go to the European Parliament as her prize when she won a young achiever of the year award. She asked if she could shadow interpreters and Mr Sturdy agreed to take her along as his guest. Alexia worked with the head of interpreting and had a real taste of life in parliament. ‘It was fantastic and I’m absolutely determined now to become an interpreter,’ she said.
Posted by arbroath at 7:01 am
Email ThisBlogThis!Share to TwitterShare to Facebook

Irony dept.: "alexia" is a medica; term referring to the inability to learn to read.