Brazilian police to use 'Robocop-style' glasses at World Cup

Brazilian police will use futuristic 'Robocop-style' glasses fitted with facial recognition equipment to identify and root out troublemakers at the 2014 World Cup. A small camera fitted to the glasses can capture 400 facial images per second and send them to a central computer database storing up to 13 million faces. 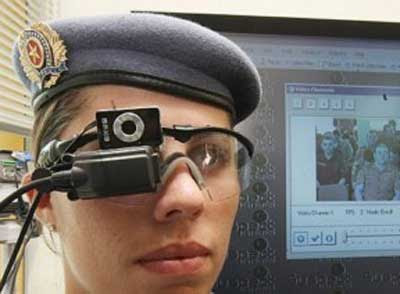 The system can compare biometric data at 46,000 points on a face and will immediately signal any matches to known criminals or people wanted by police. If there is a match a red signal will appear on a small screen connected to the glasses, alerting the police officer of the need to take further action or make an arrest. The devices will soon be tested at football matches and concerts and police in Brazil, South America's biggest country, are already planning to use them during the next World Cup.

The camera will generally be used to scan faces in crowds up to 50 metres (164ft) away but can be adjusted, if searching for a specific target, to recognise faces as far as 12 miles away. Military Police officials from Sao Paulo and Rio de Janeiro, which will both host key games in the World Cup, have been given demonstrations of how the device works. Major Leandro Pavani Agostini, of Sao Paulo's Military Police, said: "It's something discreet because you do not question the person or ask for documents. The computer does it.

"To the naked eye two people may appear identical but with 46,000 points compared, the data will not be beaten." He said the device will be useful to police trying to monitor many different locations and events, ranging from airports and bus terminals to concerts and football matches. "I can insert into the database a supporter who was involved in a brawl on the field and even with the old images, he can be located in the future," added the Major.
Posted by arbroath at 7:11 am
Email ThisBlogThis!Share to TwitterShare to Facebook

You'd have thought they'd put the camera in their hat or somewhere slightly less obtrusive. With that rig on you can't see out of your right eye at all! I hope they're not called on to shoot anyone, with no binocular vision that'll be a bit of a challenge.

it's on the right eye because there is a small screen to display in red any threat face.

as it says:
"If there is a match a red signal will appear on a small screen connected to the glasses"

Anonymous: I said the camera, not the display. The only possible reason I can think of is if they put the live camera feed to the display too, which would be somewhat disorientating given that the camera isn't where your eye is. Why not simply got for a translucent display?