Women wearing high heels and fishnet stockings were prominent in a demonstration on Sunday to protest a Toronto police officer's comment that women could avoid rape if they didn't dress like "sluts", an attitude that organizers said points to a wider problem in the justice system. 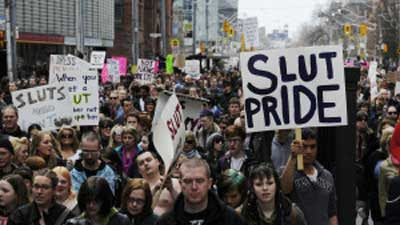 "Whatever we wear, wherever we go, yes means yes and no means no," the crowd chanted, as they marched on police headquarters, calling on police to stop blaming rape survivors for what happened to them.

The Toronto police officer made the "slut" comment to a group of York university students last January.

He later apologized, but the comment points to persistent problems in Canada's justice system when it comes to dealing with sexual assault, organizers and participants of the so-called "slut walk" said.
Posted by arbroath at 8:05 am
Email ThisBlogThis!Share to TwitterShare to Facebook

The clothes someone wears is clearly a communication, but nothing is an excuse for rape. What was he thinking?!

I was at the slut walk!
It was awesome!

The fact people are still talking about it now is just so awesome!

Thanks for spreading the word!
-Emma