In the fleeting existence of a female small copper butterfly, sex is a one-time affair. And scientists in Japan have observed that the butterflies have a simple way to avoid the unwanted attention of persistent males; they close their wings. By folding away their bright, striking wing patterns, the females make themselves less visible to males.

Lead researcher and butterfly lover Jun-Ya Ide from the Kurume Institute of Technology in Fukuoka, had noticed that female small copper butterflies often closed their wings when other copper butterflies flew very close to them. "I also found that she closed the wings at a lower rate when other butterfly species flew nearby," said Dr Ide. And he set about trying to find out why this might be. 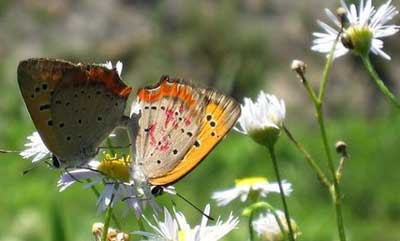 "Persistent mating attempts" from males can harm the delicate females, so Dr Ide thought the females might close their wings as an harassment avoidance strategy. He used a model of a male copper butterfly to trigger a reaction in the females. "When I brought the model close to a mated female, she often closed the wings," he said.

Virgin females, on the other hand, left their wings open. "So, I concluded that, since females don't need more copulations, they close their wings to conceal themselves," Dr Ide said. Whereas virgin females that want to mate "keep their wings open to be conspicuous". "The wing closing behaviour has evolved," he said, "to avoid sexual harassment."
Posted by arbroath at 6:03 am
Email ThisBlogThis!Share to TwitterShare to Facebook

Some human ladies might take a page from the book of those butterflies...

I just knew someone would try to use that argument.