A house in Marblehead, Massachusetts, that endured a leaking pipe for many months dialed 911 on Wednesday, finally bringing town officials to the rescue. The homeowner gone — no one yet knows where — the house likely sprang a leak during a past freeze and began spraying water all over.

"Water came down inside the walls and through the ceiling," said Health Director Wayne Attridge. "The (wood) floors have buckled. The ceilings are sagging. It filled the basement with (5 feet of) water." Worse yet, potentially toxic mould is everywhere. "It's a horrific mess," said Attridge, who said the inside of the structure may have to be gutted. 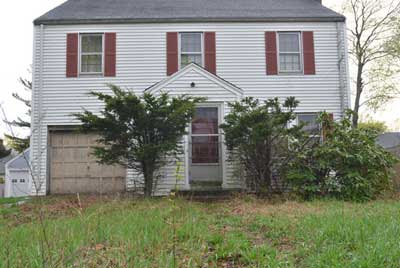 The 911 call went out to police, apparently, when water short-circuited the phone system. Police recorded it as a 911 hang-up, and when they tried to return the call they got only static. Officers were sent to the location, 31 Rockaway Ave. According to the police log, they determined that something inside was leaking before they requested permission to make a forced entry through the back door. It was then they saw just how badly this house had suffered.

Firefighters pumped out the basement, and all the utilities were stopped. The address belongs to James Cowen, and it was his childhood home. Police havelocated his daughter but not Cowen. His car was in the garage, however. Cousin William Cowen isn't surprised, and he isn't worried. James, he noted, is in his 60s and often travels. Left financially secure by his late father, he doesn't work.
Posted by arbroath at 5:07 am
Email ThisBlogThis!Share to TwitterShare to Facebook