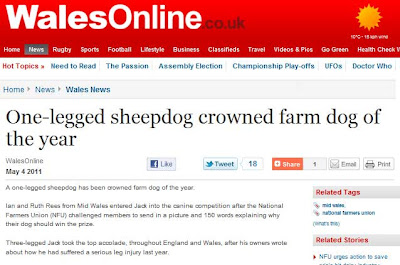 Report Wales Online.
Posted by arbroath at 7:09 am
Email ThisBlogThis!Share to TwitterShare to Facebook

A one-legged dog would be something to see... but Jack has three legs. (The math isn't the same for dogs as it is for people. This is the second instance of this mistake I've seen in the past week!)

Unfortunately they've corrected their mistake now, but it was there for almost 24 hours.

The URL gives a clue to the original headline.

haha I didn't even catch that. My mind changed it to three legged some how.

If it were a one legged dog, I'd suggest the name 'Pogo'.