Bear cub put down for being 'too friendly'

A black bear cub in Canada who was pictured approaching a police officer has been put down for being 'too friendly'. The young bear,who was known for approaching visitors to the Terra Nova National Park in Newfoundland.

Constable Suzanne Bourque was investigating reports of a bear sighting in the area when the cub brushed against her leg while she was interviewing witnesses. 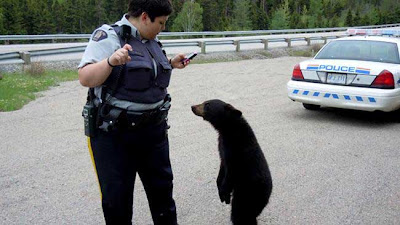 Wildlife officials caught the bear before moving it to a more isolated area, but the animal still returned to a restaurant on the Trans Canada Highway.

Kirby Tulk, acting director of conservation with Terra Nova National Park, said he had no choice but to euthanise the cub, after the warnings about not feeding it were ignored.
Posted by arbroath at 6:09 am
Email ThisBlogThis!Share to TwitterShare to Facebook

Sad, I agree, but it's a wild animal. As 'Grizzly Man' found out (too late), they can change their attitude toward humans quickly and fatally.

Why not just put it in a zoo?!

Mike totally has a point. Mike is right. The reasonable, adult side of me agrees with Mike. But the side of me who melts at the sight of anything furry and sweet mourns nonetheless. =(

Why not put it in a zoo? You're taking an animal that was raised in the wild and sticking it in a cage. I would say that making him a "roadside attraction" is more inhumane than euthanizing it.

I wonder about L also Veal.

I do hope she's okay.

To the brilliant Anon who suggested "put it in a zoo."

Do you KNOW anything about Newfoundland? Do you KNOW how many zoos we have up here? Are you WILLING to pay for the cub to be transported to a zoo, let alone the pipe dream of you coming up here and spending your money to start a zoo here?

And don't forget that this is just a CUB so far, and the local subspecies (Ursus americanus hamiltoni) grows bigger (200-600lbs) than your pissy little Mainlander black bears; you tell a wild animal that big that you have nothing for him to eat...well, you know, apart from you

Dear jaded-cynic
Your a fucking idiot. Your worried about money? Yes money does play a role in saving the poor cub, but money can be replaced a life can not.
People like you is why this world is so screwed up.