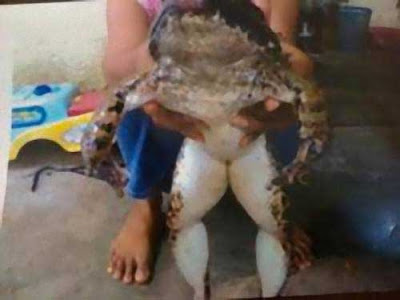 Posted by arbroath at 6:06 am
Email ThisBlogThis!Share to TwitterShare to Facebook

I'm wondering how you get a frog that size to hold still while you hold it and take a picture? Only one 'secret pic. and the evidence was eaten?

My "fake radar" is on high alert, and I'm not buying it.

There are frogs that big.

...and frogs go limp when held certain ways. It's also possible it may have been dead already when the photo was taken.