The mayor of a small town near Montreal is under investigation for mischief and harassment after he admitted to dumping a 20-ton boulder on the driveway of his ex-wife. Dany Larivière, the mayor of Saint-Théodore-d’Acton and the owner of an excavation company, says he placed the giant rock in his ex-wife’s driveway to try to get her to stop harassing him. Mr. Larivière, who festooned the rock with a giant bow and sprayed it with fluorescent orange birthday greetings, played coy in a number of interviews, saying the boulder was simply a gift for his ex. 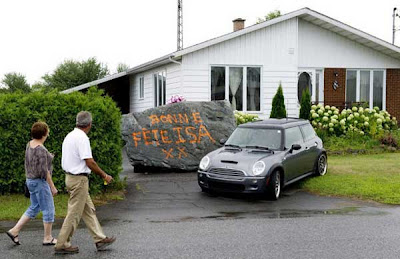 “She never had a rock big enough for her tastes, now she has one,” Mr. Larivière said. Later, Mr. Larivière said his three-year split with former wife Isabelle Prévost has been filled with acrimony. She’s threatened to report him to tax authorities unless he gave her cash payments and real estate, he said. Ms. Prévost has dedicated her life to giving him grief and he’s gone to police twice to complain about harassment, he added. “I was at the end of my rope, and I want her to leave me alone,” he said.

Ms. Prévost, in turn, said her relationship with Mr. Larivière was filled with physical and verbal abuse. “I fear for my life and for those of my children,” said Ms. Prévost, who added that the stone gesture illustrated Mr. Larivière’s own campaign of harassment. She declined to comment further. Neither account of the acrimonious relationship could be independently confirmed. Mr. Larivière delivered the load with a front-end loader at about 3 a.m. on Monday. He said he was stopped twice by police who were suspicious of the movement of heavy construction equipment in the middle of the night.

After checking his driver’s licence and the insurance and registration on the loader, they let him carry on, he said. The Sûreté du Québec confirmed an investigation is underway after Ms. Prévost, who rents the home, filed a complaint and Mr. Larivière refused to remove the boulder. In addition to potential criminal charges of harassment or mischief, he could also be charged under the highway code. Mr. Larivière, who met police on Monday afternoon said he doesn’t expect any political fallout from his act. “It’s a small town. Everyone knows each other,” he said.
Posted by arbroath at 6:05 am
Email ThisBlogThis!Share to TwitterShare to Facebook

Well, I don't know about anyone else, but I think it would be a lovely gift...

But then I'm a weird sort who just kind of likes boring stuff like big interesting rocks and trees and the like.

I like big interesting rocks... but planted on my driveway, with tacky birthday greetings sprayed on in orange paint? That does seem like harassment.