Rhino horn thieves foiled after they make off with fakes

Thieves who broke into a museum in an attempt to steal £240,000 of rhino horns were foiled after staff replaced the rare specimens with replicas. The fake horns were taken from two taxidermy rhinos at the Natural History Museum at Tring, in Hertfordshire.

Thieves smashed their way though the museums front doors between 4am and 5am on Saturday morning. They used large hammers to remove the horns from the stuffed animals before escaping. But they did not realise that staff had replaced the real horns with resin models three months ago following a string of similar raids across Britain and Europe. 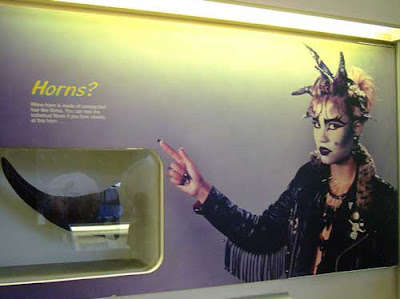 While real horn is worth around £50,000 a kilo, the stolen fakes have no financial value. Museum staff believe they were targeted by the same gang that has preyed on auction rooms, galleries and private collections in recent months. Paul Kitching, manager of the Natural History Museum at Tring, said: "We're deeply saddened by this pointless theft.

"The rhinoceros horns that have been stolen were replicas made out of resin, so they have no commercial value. We're now working with the police and urge anyone with any pertinent information to get in touch." The two stolen replicas were torn off taxidermy specimens of an Indian rhino and a white rhino, which both weigh around 2kg. Nothing else was taken during the break-in.
Posted by arbroath at 6:01 am
Email ThisBlogThis!Share to TwitterShare to Facebook