A 20-year-old man is facing charges after deputies say a practical joke with a fake snake caused two people to crash in York County. According to the Sheriff's Office report, deputies were called to the 1798 West Highway 55 in Clover on Tuesday evening at around 6:39 p.m. to help the Highway Patrol with a crash. A teenage woman told deputies she was driving down the highway when she saw the fake snake being thrown across the highway with a string attached.

That's when the snake was dragged across the highway. The teen told deputies when she saw the string, she slammed on her brakes in an effort to avoid the snake. The driver of the truck behind her then slammed into the back of her vehicle. The driver of the truck told deputies that he saw the snake and then saw the teen driver slam on brakes and he "locked up on his brakes, [but] was unable to avoid colliding with the Honda." 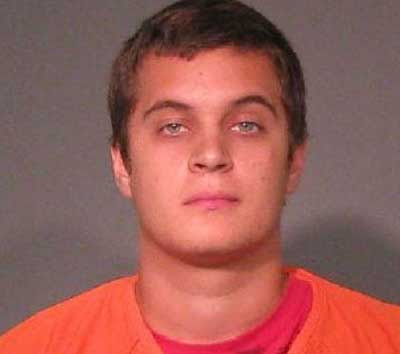 Deputies say they then spoke to 20-year-old Stafford Hugh Farris, of Clover, who admitted that he'd thrown the fake snake across the road with the string attached. "Farris was highly cooperative and showed remorse for what he had done," the report states. Deputies say Farris was concerned that someone had been injured in the crash.

He went into the garage of a home nearby and brought deputies a two to three foot long black and green rubber snake. Deputies say Farris was arrested since the snake was intentionally thrown into the road and the wreck was severe. Farris was transported to the Moss Justice Center and charged with Putting a Foreign Substance on Highway. Troopers estimate nearly $8,000 in damage was done to the vehicles. Both drivers were checked out by emergency medical crews.
Posted by arbroath at 6:05 am
Email ThisBlogThis!Share to TwitterShare to Facebook

Silly bugger shouldn't have been so close to the car in front.

Not that the 20-yr-old is faultless, but come-on! The woman was the idiot for slamming on her breaks for a snake, fake or not. She was actually the cause of the damage done.