It's fast and furious. And it has a coffee table. Australia is a land of sporting legends, and we've just added another one: The world's fastest couch. The souped-up sofa hit a world land speed record 163km/h this week during an officially timed lap on the runway at Camden Airport, southwest of Sydney. 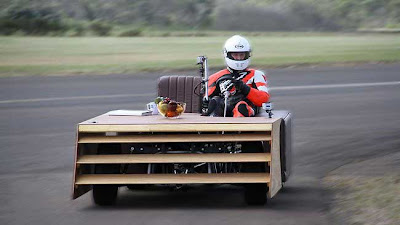 That should oust current Guinness record holder Marek Turowsk, of Leicestershire in England whose home furnishings hit 148km/h in 2008. Australia's leather two-seater, with handy coffee table (complete with cup of coffee and bowl of fruit), was built by designers Evolution Motorsport.

It is powered by a Suzuki GSX 1400 motorcycle engine. Project leader Paul McKinnon said the challenge was not just making sure it was fast, but that it could battle the aerodynamic challenge of pushing a squared-off piece of furniture at that speed.

"It's the oddest vehicle we've ever built," he said. "With race cars, you can use the aerodynamic body kit ... but with the couch, it was a matter of just doing what we could. We tried to break the airflow with the coffee table."

There's another video here.
Posted by arbroath at 6:04 am
Email ThisBlogThis!Share to TwitterShare to Facebook