Owner Tracey Sandstrom, who runs Roaming Reptiles, In Victoria, Australia, said Snappy the crocodile made a meal out of the filter in his water tank. "I think it caused the pH levels in his water to soar which has led to the change in colour." 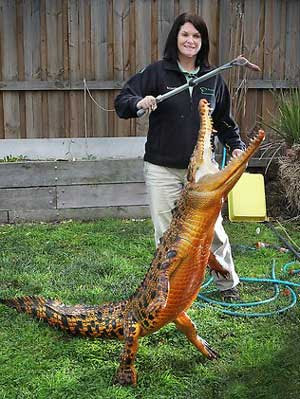 She was stunned when her prized pet turned bright orange. "Snappy's pretty territorial and he attacked the filter one day and a few weeks after that, I noticed he was orange," she said.

The 2.5m croc stays warm at night in his heated indoor tank before moving outside through his "croc flap" to bask in sunshine by day. "It doesn't seem to have affected him at all. He's still got a healthy appetite, he is normally aggro and doing everything he always does," Ms Sandstrom said. 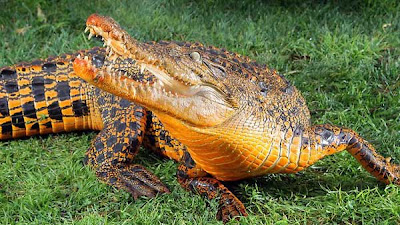 Darwin croc expert Grahame Webb examined the photos and confirmed Snappy was a picture of health.
Posted by arbroath at 6:03 am
Email ThisBlogThis!Share to TwitterShare to Facebook