With a gag in her mouth, a machete in her side and covered in "blood", this woman looks like the victim of a brutal murder. But Iranildes Araujo did not suffer a cruel end - her death was faked with tomato sauce after a hitman fell in love with her.

Hired killer Carlos de Jesus was paid £345 to murder Iranildes by Maria Simoes, who thought she was having an affair with her husband. But when de Jesus saw his intended target, he fell head over heels and confessed to her. The pair then conjured up a plan to fool Simoes into believing he carried out the hit. 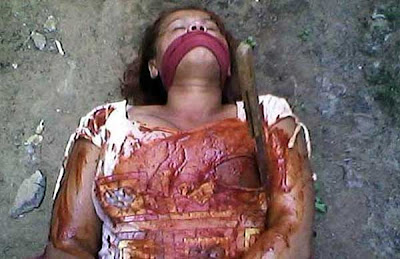 Iranildes said: "I tore my shirt, put the knife by my side, then he tied me up and smothered me with tomato ketchup." The former convict then sent the sham photo of Iranildes to his client. But the ruse was discovered three days later when Simoes saw them kissing.

Amazingly, she went to police to complain that she had been conned out of her money. Police in Brazil said the hitman and his "victim" face extortion charges and Simoes faces charges of making threats to kill. Sheriff Marconi Lima said: "In eight years of policing, I've never heard anything like it."
Posted by arbroath at 6:05 am
Email ThisBlogThis!Share to TwitterShare to Facebook