A packed commuter train sped hundreds of miles across India in the wrong direction before passengers finally realised it was pulling into an unfamiliar station. The locomotive left the southern town of Tirupati Tuesday for the eastern city of Bhubaneswar, where it was due to swing north to its eventual destination of Varanasi, a city in northeastern India.

But bewildered passengers noticed something was amiss when it chugged into Warangal - a central Indian city on an entirely different route some 600 miles (980km) west of its intended stop at Bhubaneswar. 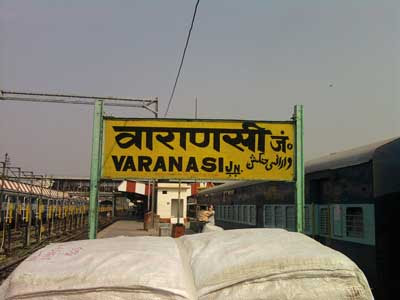 The express train had managed to cross three of India's railway divisions and travel hundreds of miles without anyone noticing it had lost its way. The mistake was believed to have arisen because it was given an incorrect destination code, compounded by the fact it was a special service and many of the staff were unfamiliar with the route.

The train was eventually rerouted along a different line and completed its 1,400 mile (2,300km) journey safely. "Though the journey was agonizing, we thank our stars that the train did not run into another train," one of its more-than 1000 weary passengers said.
Posted by arbroath at 6:04 am
Email ThisBlogThis!Share to TwitterShare to Facebook