Nastassia Mironchyk-Ivanova may be contemplating a haircut as her long pony tail probably cost her the long jump world title at The World Championships in Daegu, South Korea. 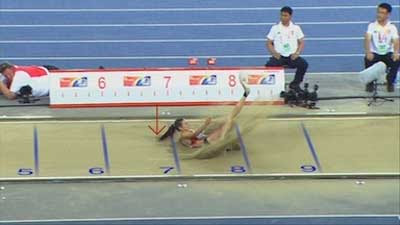 Photographic evidence showed the swinging pony tail of the Belarussian Mironchyk-Ivanova hit the ground behind her body on landing and its mark in the sand became the measuring point for the competition judges.

The third-round jump on Sunday was measured at 6.74 metres which was only good enough for fourth place. Had her hair not hit the ground the jump would have been around 6.90m which would have given her gold. 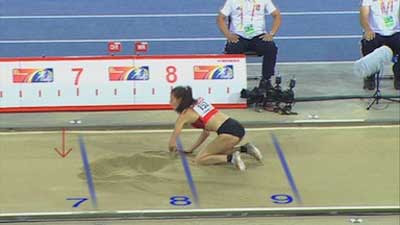 Posted by arbroath at 6:03 am
Email ThisBlogThis!Share to TwitterShare to Facebook

That just doesn't seem fair me to me. Hair shouldn't count.

"That just doesn't seem fair me to me. Hair shouldn't count."

Why not? It doesn't accurately reflect the force of her jump. If her head was shaved, she would have gotten 6.9m, and obviously her ponytail didn't give her any kind of advantage.

Before you say "that's the rules, tough!", think for two seconds about why the rules were put in place.

But it's not like she wouldn't have known the rules. She ought to have put her hair up in a bun or something. Strategy is part of every game!

In view of this rule, one could grow hair really long and tie it in a rope. Why jump when you can just throw your hair out there?

Anonymous said...
"It doesn't accurately reflect the force of her jump."

And it wouldn't accurately reflect the force of her jump if she had her arm out behind her.

It is unfortunate that she had to learn this lesson when a gold medal was on the line, however I am sure that she will never make this mistake again.

Half you are morons. It's obvious hair shouldn't count. Go back to sucking your bottles of fine wine and gawking over your art galleries. Wake up to the real world. Realistically hair shouldn't count as it is virtually insignificant in terms of performance.

If hair shouldn't count, what about the back of the jumper's head? I mean, technically it would most likely be only the hair that would touch the sand if the jumper's head was to leave a mark on it. If there is a mark on the sand and it isn't clear whether it was made by a brush of the hair or a touch of the scalp, how would you hair exception people measure the jump? As the rules are now, as far as I've understood, there is no room for interpretation and argument, the first mark on the sand counts and that's it. I don't think that's unfair in any way, but then again, I'm one of the morons who doesn't see the obvious.

How can any of you say this is not fair?
The same rules apply to everybody.

Besides, it's not the hair that counts but the mark on the sand. And it's not like she couldn't have avoided it. She quite knowingly wore her hair in a swinging ponytail.

Sure it's awful for her but it's also a pretty stupid blunder. And just because she COULD have won gold doesn't mean she deserves special treatment. I'm sure countless other contestants could have done better if they'd not made some stupid mistake. That's part of the game. This is a competition and not schoolyard skipping.