A 48-year-old Oak Hill woman was arrested on felony charges, accused of dumping a cucumber salad on the head of her boyfriend's father. Alicia Ducharme faces charges of abuse of an elderly person or disabled adult and resisting arrest without violence.

According to an arrest affidavit: Volusia County deputy sheriffs were called to a residence in the 100 block of Indian Creek Road at about 4 p.m. on Tuesday for a domestic disturbance. Daron Dyer, identified as Ducharme's boyfriend, called deputies after his father, Michael Dyer, threatened to kick the two out of his residence. 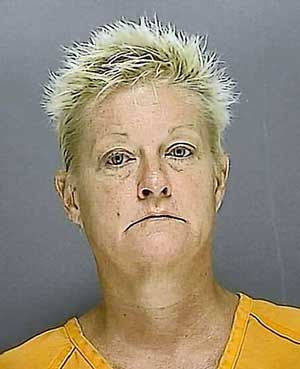 Michael Dyer, whose left leg is amputated at the knee, accused Ducharme of stealing food and money from him. When he called the woman a name, she poured a cucumber salad on his head. Michael Dyer told deputies the woman had been drinking and yelling at him. Ducharme admitted to pouring the salad on Dyer and his electric scooter.

"I'm guilty. Arrest me," she told a deputy. But when the deputy tried to put handcuffs on the woman, she resisted him. She later said she dumped the salad on Dyer after he punched her in the face, but she showed no signs of injuries. Dyer, who was not hurt, told deputies he did not want to press charges, but she was arrested anyway.
Posted by arbroath at 6:08 am
Email ThisBlogThis!Share to TwitterShare to Facebook