A woman was arrested on drunken driving charges for the second time in six months after an officer noticed beer pouring out of the glove compartment of her car, police said.

The woman said the beer was a gift from a friend for completing a court-ordered alcohol-treatment programme after her first arrest, police said. She told the arresting officers she shoved it in the glove box when she saw the blue flashing lights behind her. 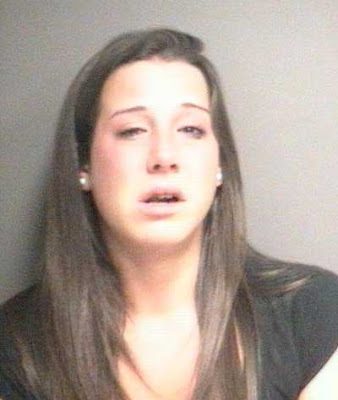 Arrested was KAitlin M. Rymaszewski, 22, of 1182 Nantasket Ave in Hull. Rymaszewski was accused of drunken driving in March, but a judge continued the case without a finding in April and ordered her into the alcoholic treatment program.

She was arrested again on Friday night in Hingham and was arraigned Monday in Hingham District Court. She id due back in court on Sept. 26 on charges of second-offence drunken driving, driving to endanger, driving with an open container of alcohol, speeding and violating marked lanes.

Posted by arbroath at 6:11 am
Email ThisBlogThis!Share to TwitterShare to Facebook