Canadian man mistakenly gets trapped in car while stealing it

A would-be car thief was stalled in his tracks Sunday afternoon after a failed attempt at stealing a Corvette. "It was so bizarre," said RCMP Sgt. Jason Keays. Shortly after 3 p.m. on Oct. 23, the Prince George RCMP responded to a male with an axe attempting take the car from a driveway on Francois Crescent. The owner of the Corvette had just finished charging the battery and was putting the battery charger in the garage when a male jumped in the running car, locked the power door locks, closed the power windows and attempted to drive away.

However, he was foiled by the standard transmission and the vehicle stalled as he reversed out of the driveway. Since the car battery wasn't fully charged, it died and the thief could not restart the car. The dead battery also meant he could not activate the power door locks or windows and was trapped inside the Corvette as the owner called 911 on the man who was brandishing a can of pepper spray. The suspect unsuccessfully attempted to break the car window with the victim's anti-theft club before trying again to break out with with a hachet he had in his backpack. 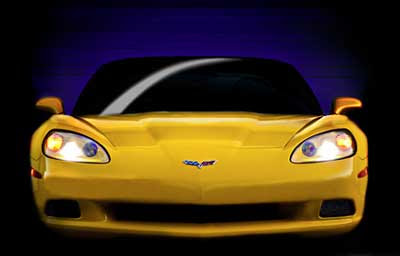 When police arrived on scene, the thief had resorted to attempting pry the window open with a screwdriver. Brent Jameson Morgan, 20, has been charged with three property-related offences and one weapons offence. Morgan, police clarified on Monday, was only allegedly held captive inside the car due to his own lack of basic vehicle knowledge. He is accused of attempting to smash out the windows of the Corvette he allegedly jumped into and tried to drive off in. However, the vehicle's weak battery gave out when the suspect stalled the car. The car could not be moved and its power locks would not release, leaving the suspect feeling trapped.

"He was not locked in, he just thought he was," said Prince George RCMP spokesman Cpl. Craig Douglass. "The thief attempted to break the window with the victim's anti-theft steering wheel lock, but was not successful. He further attempted to break out with a hatchet that he had in a backpack, but was not able to break the window." Douglass added, "When police arrived the suspect had just smashed the driver side window and was attempting to exit the vehicle. As it turns out, all the suspect would have had to do was manually slide the door lock to the side and the door would have opened." Court proceedings against Morgan are now underway.
Posted by arbroath at 6:03 am
Email ThisBlogThis!Share to TwitterShare to Facebook

Kill it before it breeds.