Church keeps prayers going to save society for 12 years

A Missouri church said it has hosted non-stop, 24-hour prayers for the past 12 years to help drive evil forces away from society.

The International House of Prayer, which has its headquarters in a converted Kansas City shopping mall, said the music and prayers have been ongoing at the facility since Sept. 19, 1999, attracting worshipers from as far away as Britain and South Korea. 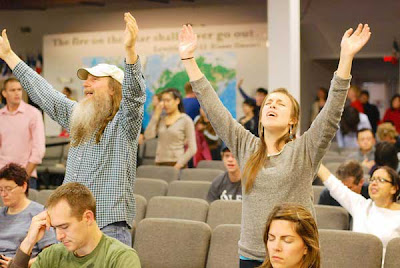 Church members said the continuous prayer is a way to weaken the grip of evil on society.

"What we do opens and shuts doors to angels and demons," founding pastor Mike Bickle said. Experts said 24-hour prayer is a growing movement in Christianity.

Full story here.
Posted by arbroath at 6:07 am
Email ThisBlogThis!Share to TwitterShare to Facebook

The guy in front looks like he's just trying to work and nutters have invaded his physics 101 lecture theater again.

I don't think there is a greater example of the utter failure of prayer and the nonexistence of a god.

It makes me grin, until I remember that there are people out there who seriously believe this does anything except waste time.

Wow, institutional OCD. But, hey, I'm for anything that cuts into their proselytizing time.

I would like for all these god fearing people to be sterilised...a small helping hand for Darwins Theory.

I mean, good god, do they not have brain matter ?

I know I'm probably going to attract some flame for this but...
Whilst this may be a pointless exercise, if it gives so many people comfort and direction in their lives, who are we to decry it?
And quite frankly, 12 continuous years is damned impressive for anything!

Yeah, you gotta love some of the comments here.

I mean honestly, what complete garbage from people who probably consider religion to be one of the main sources of "evil" in the world.

Turns out you don't need religion to be a dick to other people for no reason.