Deer rescued after getting stuck in rope swing

A young buck in Auburn, California, whose antlers got tangled in a rope swing spent five stressful hours trying to free himself before a tranquilizer dart ended his suffering. A Lake of the Pines resident saw the deer struggling against the swing at 7:30 a.m. on Friday and notified authorities. 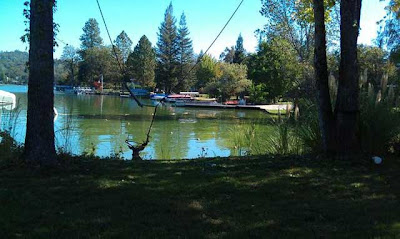 Game Warden Patrick Foy, who was in the field working a salmon poaching detail, returned to his downtown Sacramento office to pick up a dart kit and arrived at Lake of the Pines shortly after noon. The buck, who Foy said was probably two years old, was knocked out by a dart to the shoulder and cut free from the swing. A neighbour's garden hose helped cool the deer, who had become overheated during his ordeal.

Foy said deer often don't survive the stress of entanglement, but the relatively cool temperature improved the chances. Foy cut both antlers off to protect the buck from hunters following his release, which he said was standard procedure in a deer rescue. After the deer was loaded into the Fish and Game pickup truck, several neighbours helped carry him on a sheet of canvas to a golf course fairway. 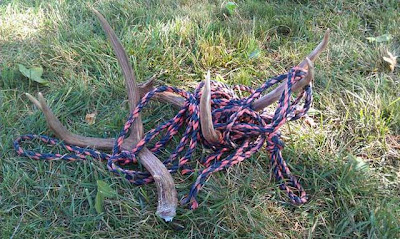 Foy monitored the deer's temperature and when it appeared to be in a healthy range, he administered a shot to reverse the tranquilizer's effects. After a few minutes, with a helping hand, the deer tentatively stood up and then tentatively wandered away. "He's got a bit of a hangover, but he'll be OK," Foy said. "He's a lucky deer."

With news video and photo gallery.
Posted by arbroath at 6:06 am
Email ThisBlogThis!Share to TwitterShare to Facebook