A young fashion designer from the German city of Hanover is revolutionising high fashion by designing clothes with a staple she can find in her fridge - milk. Anke Domaske, 28, has developed a fabric called QMilch made from high concentrations of the milk protein casein - the first man-made fibre produced entirely without chemicals. "It feels like silk and it doesn't smell - you can wash it just like anything else," Domaske said. 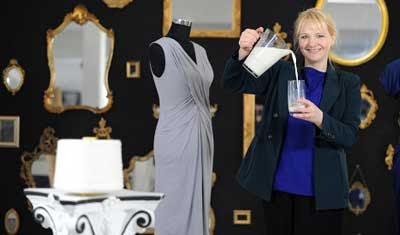 Made from all natural materials, the QMilch fabric is ecological but also has many health benefits, said Domaske, who also said the amino acids in the protein are antibacterial, anti-ageing and can help regulate both blood circulation and body temperature. Domaske's fashion label Mademoiselle Chi Chi has now started weaving the milk fibre into its collection. Currently the MCC clothes - which feature flowing wrap dresses with edgy cuts and bright patterns - are made from a combination of various fibres, including QMilch. But Domaske plans to design a collection made entirely from the milk fibre.

Milk fabric has been around since the 1930s but was always produced in unecological ways that used a lot of chemicals. Unlike earlier prototypes, QMilch is made almost entirely from casein. "We have developed an all-natural fibre consisting of a very high concentration of casein, with a few other natural ingredients - and in only two years," the former microbiology student Domaske said. The casein is extracted from dried milk powder and then heated up in a type of meat-mincing machine with other natural ingredients. The fibre comes out in strands and is then spun into yarn on a spinning machine.

Domaske said it would take about 6 litres of milk to produce an entire dress, which costs about 150 euros($199) to 200 euros. Luckily, for that kind of money, the clothes don't come with an expiry date - during the heating process, the molecules bind in such a way that the protein won't decompose. Due to its anti-bacterial qualities, the milk fibre can also be used in medicine and makeup. Even some auto companies have looked into using the fibre for car upholstery.
Posted by arbroath at 6:03 am
Email ThisBlogThis!Share to TwitterShare to Facebook

I love seeing something so natural being used for practical uses. A friend and I were talking the other day about our childhood (I'm 70, she's 69). There was no plastic that we can remember. Now almost everything is made out of plastic, which is made from petroleum.

I am always amused to hear something praised as being made "without chemicals", as if it was possible to make something out of pure elements without using chemical compounds. Water is a chemical, and so is casein. On the other hand such terrible "unnatural chemicals" as sulphuric acid, formaldehyde and cyanide are perfectly natural, made by Mother Nature. I get what they are trying to say, but it's still stupid.

It might be a good lure for more gullible people, but I am simply turned off by the misleading, woo wooish claims of the anti-ageing and regulatory functions of casein in this context. I can pretty much guarantee the casein in QMilch won't affect your circulation in any way. At least if you just wear it and don't eat it.

There are goats which have been genegeneered to produce silk in their milk, I don't really see this as being a heck of a lot different.

But Ratz, this is all natural, none of that horrible gene stuff involved.