Nazi raccoons have succeeded where Hitler's armies failed after the first wild raccoon was caught by a home owner near Dudley. There are already a million occupying territory from Spain in the south up to Denmark in the North after they were released into Germany by Hitler aide Hermann Goering outside Kassel, a small city north of Frankfurt which is now the raccoon capital of Europe. Until now only Britain has stood as the last bastion against the furry Blitzkrieg but after the discovery of the first wild raccoon in the UK experts fear there is now a breeding population - and that they will start to spread.

German officials have tried shooting, trapping and poisoning the masked menace to cut back on numbers since it was introduced by third Reich officials in 1934 to enrich local wildlife. Vet Will Sterling who examined the raccoon found in Birmingham said it was a young animal that had not been domesticated. He said: "The one thing we are certain of is that it is certainly not a pet. It was not familiar with humans at all and was pretty vicious." 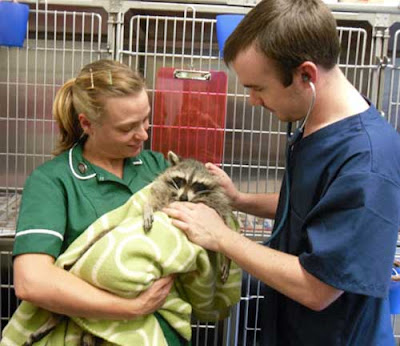 Prior to this case a raccoon was photographed in a Hampshire back garden in February, following on from two sightings in County Durham in 2010 and incidents were recorded in Surrey, West Berkshire and Portsmouth in 2009. Raccoons were covered by the Dangerous Wild Animals Act but a change in the UK law in 2007 ensured a license was no longer necessary to obtain them as domestic pets. Sightings across the country were initially dismissed as isolated incidents of domestic runaways. As kittens raccoons can be playful but their temperaments change dramatically as they get older becoming aggressive and difficult to handle, which often persuades inexperienced owners to release them into the wild.

Charlie Wilson from Natural England, said that a single mating pair was capable of precipitating an entire species. A raccoon pair can have six young a year. He added: "As long as we do not get breeding pairs in the wild the solitary animals will die out naturally, even if not caught or killed. But the influx of sightings over the last few years does seem to point to a more serious problem than a few pets on the run. From an ecological point of view, I don’t think a breeding population of raccoons would have any trouble surviving in the wild in Britain"."
Posted by arbroath at 6:04 am
Email ThisBlogThis!Share to TwitterShare to Facebook

I think they can survive pretty-much anywhere. They're very well-adapted to life in the city. There are a million (!) of them living in Toronto. They're very smart and have opposable thumbs, so they're a good candidate to replace us.

I think I will start a band called Herman Goering's Nazi Raccoons.

They don't have salivary glands, so have to soak most kinds of food in water before they're able to eat it. In German they're called "wash-bears".