A couple who lost a bag full of their possessions were overjoyed when it suddenly arrived in the post a few days later. Jeremy and Sally Weaving were delighted that someone had taken the trouble to fish out their address, parcel up their belongings and pop them in the mail. But their joy turned to shock when they discovered that the sender had kept their camera as a “reward” for returning the other items.

The writer, a woman who had lost her own camera, said people had to pay for their mistakes and told the couple to regard it as a travel expense. She gave a false address and signed herself: “A good Samaritan – but not that good.” The couple, of Pentridge Way, Totton, mislaid their bag at Bournemouth Airport after returning from a two week holiday in Italy. 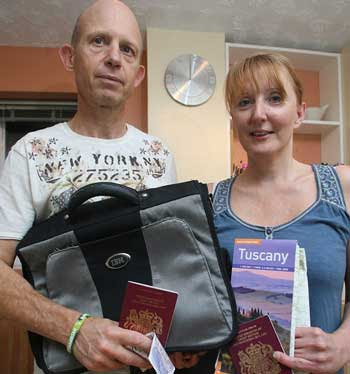 It contained their passports, Mr Weaving’s driving licence, a small amount of money and a Panasonic Lumix camera worth £150. Mrs Weaving said: “You can imagine our surprise when a large parcel arrived at our house. I thought ‘hooray – good people really do exist’ – but things weren’t that simple. The passports, driving licence and money were all there but the camera wasn’t. In its place were the memory stick and a letter from the finder.

“My reaction was twofold – relief at having my documents returned and shock at the liberty which had been taken with my possessions. If the person had done the right thing by handing the bag in at the airport a lot of anguish would have been avoided. Call me old fashioned but I always thought a reward was given, not stolen.” Mr Weaving contacted Dorset police, who are treating the incident as theft.
Posted by arbroath at 6:05 am
Email ThisBlogThis!Share to TwitterShare to Facebook

What? The good samaritan had all the reasons not to return the bag for their stupidity yet he did. Then they complain that their camera was 'stolen'. It wouldn't be 'stolen' if they didn't lose it in the first place!!

It was decent of said samaritan to return the memory card (presumably still with their photos on it) instead of just wiping it.

Incidentally, having had a bit of crappy software recently delete all the images off my cellphone memory card, "photorec" is some rather nifty software that does a great job of recovering them. It's also handy that if a security guard demands that you delete a photo, you can do it fairly secure in the knowledge that (as long as you don't take any more photos on that card today) you can get the images back as soon as you get home.

Theft is theft, Brixter. I can't believe you actually would question their use of the word stolen. A crime is never the fault of the victim, whether it is theft, rape or murder and whether the victim acted carelessly beforehand or not.

So they left their bag, passport, camera and everything, and complain when they got everything back except for their camera and some cash. I guess they're glad someone returned the bag, now they can blame someone else for them not taking care of their belongings.

What are the chances of things getting lost and finding their way back to their owners??

The couple are not complaining about the fact they were very lucky and got most of their stuff back. They are complaining about a theft. Losing the bag in the first place was their fault, the theft of the camera wasn't. If their bag had been found by someone other than a thief - I know for a fact such non-thieves exist - they would now have also their camera back.

Forgetting stuff behind is not an invitation for thieves anymore than passing out in a miniskirt is consent for intercourse.

"Go, and do thou, ummm, a little better than that."

Well...there you go, live and learn....I will never pass out in a miniskirt again.

If no one found her bag, the camera and her passports would still be "stolen". Will she report people who saw/pass by her bag as thieves because they didn't return it? It's her responsibility to take care of her belongings.

No, Brixter, if no one found the bag, the camera and the passports would still be missing.

The finder should have just binned the bag. The finder wouldn't have a theft report filed against him/her for returning the bag minus the camera. Very ungrateful.

Returned bag without camera is better than no bag at all.

This is a simple rule to live by - If you take something that isn't yours, it's theft. As it states in the article, 'If the person had done the right thing by handing the bag in at the airport a lot of anguish would have been avoided.' The bag should not have even been opened in the first place. The thief had an alternative method to get the bag to the owners without stealing.

Indeed, shak, there was a clear and simple right thing to do, and the woman who found the bag chose something else.

They(the couple) lost their stuff and they have partially got them back. It would have been lost anyway.

What kind of foreign tourist thinks they get lost stuff back when they lost something in ITALY?

As they claimed the person who kept the camera, there'll be less people would return anything at all.

The Samaritan is certainly good enough for me. Writing that message was not necessary but I am sure the Samaritan mean to amuse the "happy" recepient of the parcel.

No, it wouldn't have been lost. It was in the airport. It would have been turned in as it was a bag without any clear owner. You are to inform security if you see a baggage that appears to be left alone. So I disagree with you, Bix...I mean "anonymous."