Experts are studying footage showing a penguin swimming at a Portsmouth beach. The bird — normally seen 6,000 miles away in South Africa — was filmed just yards out to sea by a shocked visitor. It was also spotted earlier waddling around the harbour during the weekend heatwave. 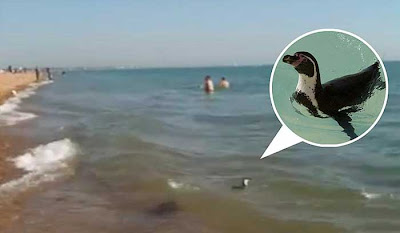 Experts said it could be an endangered African jackass penguin, that makes its home near Cape Town. One theory is it was separated from its group and followed a food trail through the Atlantic to the Solent. But it would have had to avoid busy sea lanes and predators like sharks and seals.

Mother-of-two Joanne Gordon, 35, of Aldershot, Hants, shot the footage at Southsea on Sunday. She said: "I looked down and couldn't believe it when I saw it swimming around away just six foot from me.

"I'm convinced it was a penguin. It zoomed off after about five minutes. I know climate change is in the news at the moment,but penguins in Britain is getting ridiculous." Robert Westby, of Amazon World Zoo which keeps the jackass breed on the nearby Isle of Wight, said: "It certainly looks like a penguin."
Posted by arbroath at 6:01 am
Email ThisBlogThis!Share to TwitterShare to Facebook

Let's see....either it swam enormous distances thru shipping lanes and predators.....OR...it came from the colony on the nearby Isle of Wight....what do YOU think?

Time for the Amazon World Zoo to do inventory, I think...