A Las Cruces woman was jailed after allegedly stabbing her boyfriend for not buying her another 40-ounce bottle of Olde English 800 malt liquor. Do-a Ana sheriff's deputies were called to a house on the 9500 block of Butterfield Boulevard at around 5:30 p.m. on Thursday after Alexa Monet Rodriguez, 22, allegedly became enraged at her boyfriend and stabbed him in the arm with a 14-inch stainless steel knife, according to sheriff's office spokeswoman Kelly Jameson.

Rodriguez also allegedly had thrown a 3-pound weight at her boyfriend so hard it got lodged in the wall, then struck him in the back with a TV tray and a chair, Jameson said. After the alleged stabbing, Rodriguez allegedly threw the knife at the victim and fled. 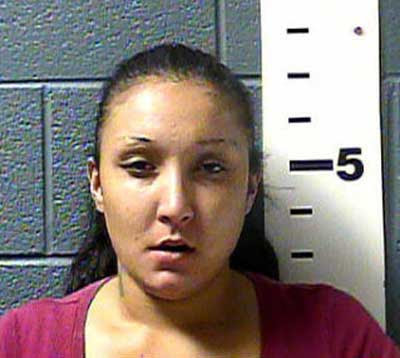 The victim, a Farmington man who just moved to Las Cruces three months ago, was transported by ambulance to an area hospital to be treated for non-life-threatening injuries.
Posted by arbroath at 6:07 am
Email ThisBlogThis!Share to TwitterShare to Facebook

I'm thinking she might be newly single, Steve. Now's your chance, if you want to catch her on the rebound ;)

You can tell she appreciates the finer things in life and likes her relationships to be "passionate."