'Bubble Man' emerges in bid to save children from same fate

A man ravaged by a shocking skin disease has revealed himself in public in a bid to save his children from the same fate. Chandra Wisnu, 57, suffers from a rare disease that has left him covered in tumours resembling pink bubble wrap. The father of four - known as "The Bubble Man" in his home village in Indonesia - rarely leaves his house. When he does, he wears three jackets, a balaclava and sunglasses so he doesn't frighten children. 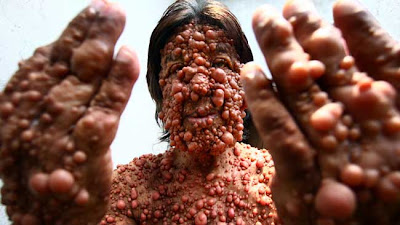 "People are afraid, they are frightened of my horrible face and worried they might catch the disease," he said. "So instead I avoid people, I rarely go out except to pick up my daughter from school. And when I do I cover my head and my face because I don't want my daughter's friends to bully her for having 'the dad with the horrible face'." Mr Wisnu said the lumps first appeared when he was 19.

By the time he was 24, they had spread to his back. At 32, his entire body was covered. Mr Wisnu said after several years of treatments and creams, his parents stopped taking him to dermatologists and he became resigned to learning how to live with the disease. He told of his wife to "leave and never return", but she has stuck by him for the past 33 years. "I refused," she said. "Seeing him carry on with his life in spite of his changing appearance was to me a sign of great strength, not weakness." 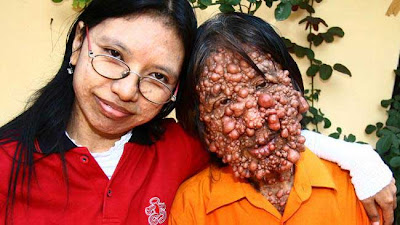 Now Mr Wisnu has decided to unveil his face to world in a bid to find a cure for the disease. His eldest son Martin, 32 and daughter Lis, 26 have begun to develop the disease. He said he can't afford for his children to see a doctor and fears they too will end up looking like him. "They only have some small tumours now but they worry they will get worse," he said. "If there is a chance to get such kind of free medication, I will take that chance, but right now my family is all the treatment I need."
Posted by arbroath at 6:06 am
Email ThisBlogThis!Share to TwitterShare to Facebook

pretty touching but I don't think there's a cure if the problem is genetic.

If I was him, I wouldn't have fathered any children. To prevent the gene from spreading.

Given his age and the state of his body at the time of having the first child, he may not of known the full extent of the disease or that it was hereditary

Best of luck to them all - a horrible affliction to have to live with...

I watched a similar story on Mystery Diagnosis. I know the young man was serving in the military and couldn't perform his duties due to the pain and fatigue from his flare ups. From what I remember, he was terminal but managable I think b/c of an enzyme deficiency. He had to change his life style.

"My Prayers go out to this Dad and his children"