A couple were told they were having one baby at their first scan, twins at the second and triplets at the third. Now Paul and Camille Thompson have a ready-made family. Camille, 34, was thrilled to learn she was pregnant and ecstatic when she discovered she was having twins at eight weeks.

Then a third scan at 12 weeks produced the amazing news she was carrying triplets. Beautiful baby girls Amelie, Lori and Sofia are now home at Houghton-le-Spring, near Sunderland, after spending their first 10 days in hospital. First-time mum Camille said: "It has been absolutely amazing, but totally bonkers. 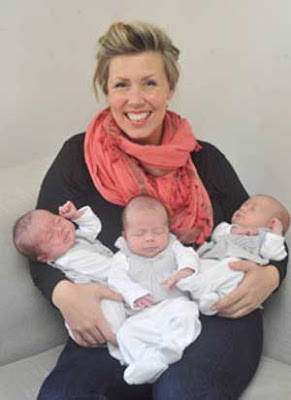 "Paul and I had been trying for a while, so we were delighted to be expecting a child. When we discovered we were expecting twins, we thought, 'Great'. When the third scan came round and we were told I would be having triplets, Paul went into shock. But everything was fine and they were delivered by C-section, so in the end it was a relatively easy birth.

"We always wanted three children - we just didn't expect them all at the same time." Paul, 34, a fireman, added: "I can only assume they were hiding behind each other so we couldn't see them. But we are both delighted to have three healthy children."
Posted by arbroath at 6:00 am
Email ThisBlogThis!Share to TwitterShare to Facebook