Got the time? Not if you live in a Black Country town where a showpiece clock shows four different times. And all of them are wrong. The Millennium Clock, at the Moor Shopping centre in Brierley Hill, West Midlands, was built to celebrate the arrival of the ‘noughties’. 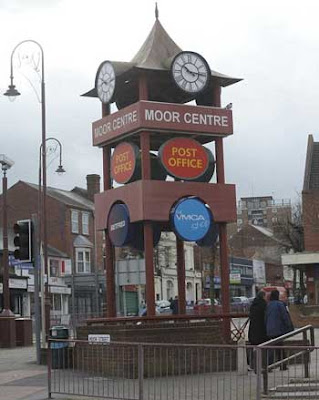 But locals say it hasn’t shown the right time for 11 years. The clock, which has four faces, is so confusing that each face shows the incorrect time, and there is up to two hours’ difference between them. When visited last week, one face was 31 minutes slow, a second was 33 minutes slow, the third was one hour 46 minutes fast and the fourth was two hours fast.

“It’s not exactly Big Ben,” said Alex Hemmings, who lives in Brierley Hill. “But then that’s the reason nobody can understand how hard it can be so hard to put it right. It was never a particularly grand gesture to mark the turn of the Millennium.

“They said the Millennium Dome was a white elephant but at least that works now. This clock is hilarious. I dread to think how many poor old dears have been caught out by it over the years.” Mr Hemmings, 50, revealed he had tried to find out who was responsible for the Millennium Clock on many occasions but had never been successful.
Posted by arbroath at 6:02 am
Email ThisBlogThis!Share to TwitterShare to Facebook