Going to the loo has never been more fun, after the world's first urine-controlled video game is installed in a London bar. Visitors at the The Exhibit Bar in Balham can play one of three games every time they use a urinal. 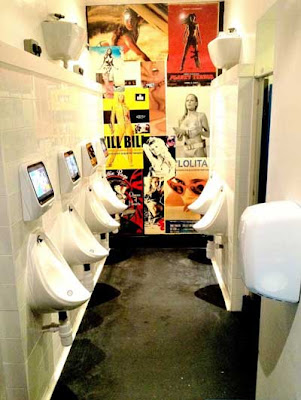 The video game has been trialled in a bar in Cambridge since mid-July and it has proved to be both popular and profitable. One of the game's co-founders, Gordon MacSween, was not sure how the public would react to the game initially. But as soon he saw the game on trial at a bar in Cambridge he knew he was on to something good.

The game was designed to create a valuable media opportunity from the 55 seconds the average male spends while he pees just staring at a blank wall. There is an advert played before and after the game promoting a drink you can buy at the bar.

At the end of the game, players are encouraged to post their scores via mobile to Twitter and to a live leader board so they can compete with their friends. The units will be rolled-out in selected venues across the UK in early 2012.
Posted by arbroath at 6:03 am
Email ThisBlogThis!Share to TwitterShare to Facebook