A man is behind bars after being caught selling drugs outside a Coventry nightclub dressed as The Incredible Hulk. A court heard Scott Anderson – who had painted his face green and was in fancy dress – could not have stood out more. Anderson, of Hewitt Avenue, Radford, Coventry was drunk and trying to sell cocaine he did not want outside the Skydome in the city centre. Police were alerted by his costume which was based on the TV and film character who becomes green and superhuman when angry. At Coventry Crown Court he was jailed for supplying cocaine and possessing cannabis.

The 32-year-old sold cocaine, a class A drug, to a fellow clubber in April not knowing his bright costume had caught the eye of watching police. Even Anderson’s defence admitted to the court “he couldn’t have stood out more”. Christopher O’Gorman, prosecuting, outlined the events which led the defendant to be caught by two police officers outside the Skydome on April 23 at about 3am. He said: “At around about that time they saw the defendant, dressed conspicuously as The Incredible Hulk, hand something to someone who handed money to the defendant.” Mr O’Gorman explained how the officers approached the man Anderson had been seen with and found him with a small amount of cocaine. 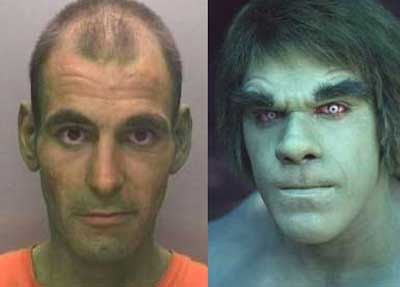 And when he told them the cocaine had been bought from the defendant, police confronted Anderson and found him with another bag containing 5g of cannabis. “The police also found a small bag containing a small amount of cocaine in one of his training shoes,” Mr O’Gorman told the judge. The defendant - who has previous convictions for drug offences – was arrested on the spot. Anderson initially responded “no comment” to police questioning before confessing he bought the drugs for his own use and sold them on because he did not want them. At a hearing in September, Anderson admitted the charge of supplying cocaine, a class A drug, and another charge of possessing cannabis, a class B drug.

Shane Crawford, defending, said; “This was a serious lapse on his part, a serious lapse and aside from the comedic element, his dress, he couldn’t have stood out more to police. This was a drunk man seeking to get some money back for a purchase that he had made for himself,” he added. “It was a drunk attempt to get his money back on his way home. That’s very different from low level street dealing.” Sentencing him to two years in jail for the supply of cocaine with one day concurrent for the possession of cannabis, Recorder Justin Wigoder said: “You frankly of all people should have known that this is a very serious matter because 10 years ago you served convictions for possessing drugs with intent to supply, first heroin and then ecstasy.”
Posted by arbroath at 6:02 am
Email ThisBlogThis!Share to TwitterShare to Facebook