A mobility scooter converted to be driven by a supercharged petrol engine has been seized by council officers in South Yorkshire. Officials at Doncaster Council said the scooter, normally used by people with mobility problems, had been causing a nuisance in the area.

The vehicle had been ridden at speeds of up to 60mph in field scaring wild deer and annoying residents. The 24-year-old rider of the machine was stopped and the vehicle seized. 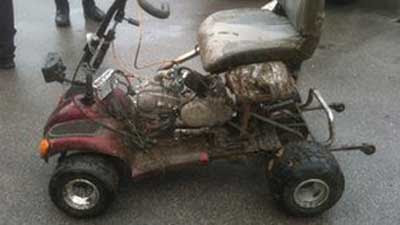 Councillor Cynthia Ransome, who is responsible for Communities on Doncaster Council, said the machine was a "feat of engineering". She said: "Whilst it may look like a lot of fun to ride, this type of noisy vehicle annoys residents immensely and terrifies local wildlife and walkers.

"We don't want to stop people having fun and this is obviously quite a feat of engineering, but when they build machines like this they should be used at licensed tracks and not in areas where they annoy others."
Posted by arbroath at 6:00 am
Email ThisBlogThis!Share to TwitterShare to Facebook

"a supercharged engine and has been spotted going 60mph" errrr ummmm yeah NO that's not supercharged it's a standard 110cc, 125cc or maybe a 150cc engine. is just your average Chinese atv/dirt bike engine. I can clearly see a standard carb, intake and air cleaner. as for 60mph? yeah maybe if it WAS supercharged. more likely about 30-35mph with 110cc or 45-50 with 150cc depending on the weight of that contraption + driver. *obvious fail > this is in "England" so it wouldn't be mph it would be km*

>Clearly a made up story< interesting kluge though

We use mph in the UK. Don't confuse us with our continental cousins (although these days, just to cause confusion, we use metric metres rather than feet).

It's not a made up story. Feel free to check with Doncaster council if you like. As for the 60mph bear in mind that this is from witness statements and people usually overestimate the speed of any vehicle they see, especially if it's making a lot of noise.

The thing is that councils and police forces are impounding quads, motorcycles, scooters and occasionally cars all over the country for this sort of behaviour. This just made the news because it was a weird vehicle.


Looks like they've botched in a rear axle from a cheap kids quad in there. Of the idiots we see on the playing fields near us on in particular has pulled off a similarly weird feat of engineering. He has taken the forks off a scooter and somehow fitted the front end of a quad. Looks stupid and has too much weight to lug around to actually accelerate with any alacrity. However it does fishtail like crazy which probably keeps the owner's tiny mind abuzz for hours.