Christopher Herbert says he could not believe it when Simpsons fans started bidding for his bit of dried glue that bears a resemblance to Homer Simpson. The blob of dried glue, that can be said to bear a vague resemblance to the famous cartoon character, has attracted bids of over £50,000 at eBay. 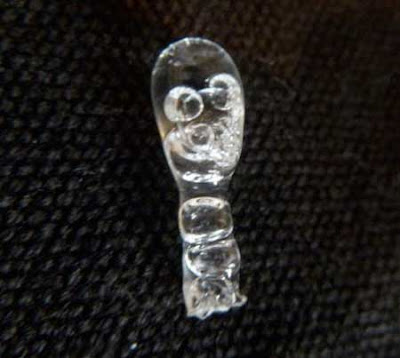 After finding the item whilst clearing out his stationery cupboard, London-based seller Christopher Herbert listed the object online after his girlfriend noticed it shared some of Homer's distinctive features including his large eyes and oval-shaped head.

Putting it up for sale more out of fun than expectation, Mr Herbert started the bidding at just 99p. It has since increased to almost £55,000 after 53 bids with the auction due to close on Monday.

In his listing, Mr Herbert describes the peculiar item as the 'missing piece' in any Simpsons fan's collection and states its origins as "made naturally by an overflowing tube of Uhu glue!" The 36-year-old Londoner, said: "I've never actually sold anything on it [eBay] before, so I thought I'd just stick it on for a bit of a joke to be honest. I didn't think anyone would actually bid for an old bit of dried glue, even one that looks like Homer Simpson.
Posted by arbroath at 6:02 am
Email ThisBlogThis!Share to TwitterShare to Facebook

i wonder what the odds are that the winning bidder will actually pay for it?

Thats the thing. I checked and the current bid is $147,600. They can bid whatever they want but that doesn't mean they'll actually buy it. There are bidders with low ratings as you would expect but also a few with decent ratings. Bizarre.

Read the comments on the bottom of the ebay page. Hilarious.