Draped in his iconic khaddar, round spectacles and walking stick, some 485 children in Kolkata created a new Guinness World Record for dressing up as Mahatma Gandhi, the founding father of India, to mark the 64th anniversary of his death. 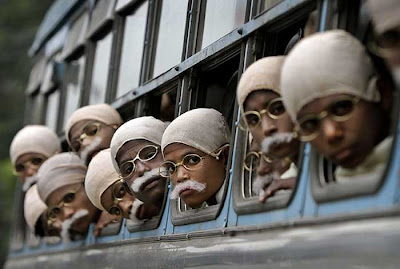 Most of the children taking part in the event were aged between 10 and 16 and came from underprivileged backgrounds. It was organised to promote the Gandhian ideology of non-violence.

The children marched for half of a kilometre through Kolkata to recreate Gandhi’s peaceful march to Dandi in 1930 to protest against the British salt tax which led to a wider Indian independence movement. 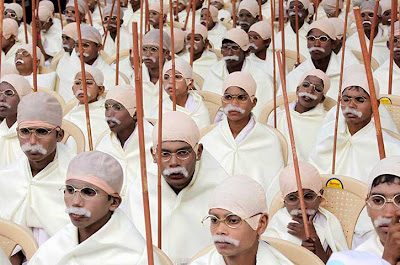 Guinness verified the successful attempt, which broke a previous record set in 2010, when 255 students dressed up as Gandhi in Coimbatore in southern India.

There's a photo gallery here.
Posted by arbroath at 6:03 am
Email ThisBlogThis!Share to TwitterShare to Facebook