A dispute over whether a terminally ill woman should have been given tea and toast or an orange apparently upset her husband so much that he shot and killed two of the woman's sisters and his own son before killing himself, a US sheriff says.

The sick woman, Darlene Gilkey, witnessed the shootings from a hospital bed in her living room Ohio, but wasn't hurt, Hocking County Sheriff Lanny North said. The 59-year-old is dying of cancer, he said. 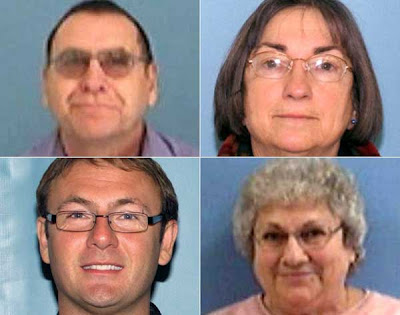 The woman's son, Ralph Sowers III, survived the shooting after his stepfather, Paul Gilkey, ordered him out of the house, Sheriff North said. After the shootings on Monday afternoon, Paul Gilkey, 63, stepped out onto his front porch, sat down in a chair and shot himself, the sheriff said.

Killed at the home were Darlene Gilkey's sisters, Barbara Mohler, 70, and Dorothy Cherry, 63. Also killed was Paul Gilkey's son, Leroy Gilkey, 38. Sheriff North said events leading to the shootings began earlier in the day when some of the victims had apparently served Darlene Gilkey tea and toast after Paul Gilkey had already peeled an orange for her.

Full story with news video here.
Posted by arbroath at 6:06 am
Email ThisBlogThis!Share to TwitterShare to Facebook

That poor family. As if the woman didn't have enough to have to deal with.

Yes, that's what happened. This happened in my state. Our local news interviewed a family friend and he said that the shooter was under a huge amount of stress and there were tensions between him and his wife's family about her care. (That's no excuse for what happened, just background info).

He told his stepson that he was sparing him because he (the stepson) had children to care for.

I feel so sorry for the terminally ill wife who had to witness that and now is facing death without most of her family.

Caregivers are under lots of stress.