Thieves spent up to six months digging 100ft tunnel to steal £6,000 from ATM

Thieves in Manchester dug a 100ft (30m) underground tunnel to get to a cash machine. The theft happened overnight on Monday 2 January at Blockbuster in Fallowfield Shopping Precinct. A similar plot was foiled in the same area in 2007, and police believe it may have been carried out by the same gang. 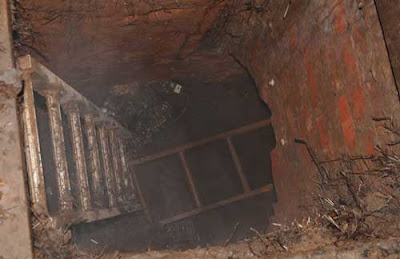 Thieves dug the tunnel directly under the cash machine and used machinery to cut through more than 15in (38cm) of concrete to steal the money. Det Sgt Ian Shore from Longsight CID said: "In all my years of service, I've never seen anything as elaborate." However, the thieves only escaped with about £6,000 - because the machine had not been re-filled after the New Year bank holiday.

The tunnel started from a railway embankment at the rear of the shop, and went under a car park and beneath the foundations of the store. The passageway was about 4ft (1.2m) tall and had been fitted with lighting and roof supports. Police said the offenders also made their getaway back down the tunnel. 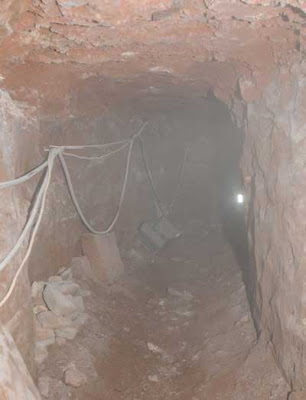 Officers believe the people responsible could have spent up to six months digging the passageway. Det Sgt Shore said: "These people had obviously spent a long time plotting this crime and I doubt they would have been able to keep their plans secret for all that time, without telling others about their scheme. They must also have spent a lot of time in the area over the past few months, which people may have noticed."
Posted by arbroath at 6:01 am
Email ThisBlogThis!Share to TwitterShare to Facebook

It amazes me how much work many criminals will do to avoid getting a proper job. What is more it is so often the case that they will make less money from their crimes than they would if they were stacking shelves in the local supermarket.

For that to be the case though, those jobs would have to actually exist...

...and for those few jobs that do exist to not be akin to wage slavery. While a few hold the majority of the money, they will be able to dictate when and where we work and we will be in their thrall - which is why some people choose to escape the system.

If all you've got is a pickaxe, every problem is best solved with a tunnel? ;-)

I've never dug a tunnel, but six months to dig a 30 meter long tunnel seems like an awfully long time. Then again, perhaps it was more of a thing these people did on the side, when they had nothing better to do. Everyone needs a hobby!