A Bristol builder shouted homophobic abuse at a man in Fishponds, and even made concrete model penises that were placed outside his house. Michael Parkes, 34, pleaded guilty in absence to using threatening words and behaviour at Bristol Magistrates' Court. Bridget Sanger, defending, explained that Parkes could not attend court because at a separate hearing in November he had been thrown down the stairs by a co-defendant.

She said that Parkes, of Butlers Walk, St George, had broken his ankle and was housebound. Andrea Edwards, prosecuting, said the incident occurred on March 12. Parkes and another builder were working on a house in Bourneville Road when a neighbour, Richard Ives, asked if he could take his washing inside before they started work. "Parkes began acting aggressively and called him 'a queer'," said Ms Edwards. 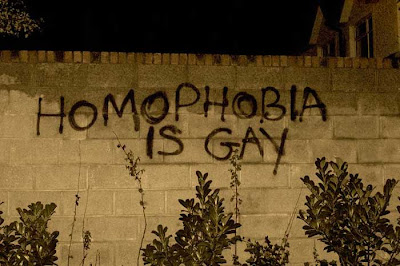 The court heard Parkes shouted and swore at Mr Ives, subjecting him to more homophobic verbal abuse. "Mr Ives went inside and then left the house to pick up his partner," she said. "When they got back there was a piece of chipboard outside his house with a drawing of a penis and a homophobic slur written on it. There were also two models of penises that had been made out of cement, placed on his wall."

Ms Sanger, defending, said Parkes maintained he did not make the models but had pleaded guilty to get the case dealt with quickly. She said he used to be a heavy drinker but had tried to change. Magistrates fined Parkes £200 and ordered him to pay Mr Ives £200 compensation. He must also pay £200 costs plus a £15 victim surcharge.
Posted by arbroath at 6:00 am
Email ThisBlogThis!Share to TwitterShare to Facebook